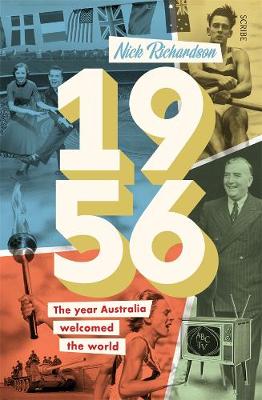 1956: The Year Australia Welcomed the World

Description - 1956: The Year Australia Welcomed the World by Nick Richardson

An engrossing account of a pivotal year in Australia's history.

An engrossing account of a pivotal year in Australia's history.

This book debunks one of the hardiest cliches in Australian history- that the 1950s was a dull decade, when the nation seemed only interested in a quiet life, a cup of tea, and a weekend drive. The truth is that, by the time the '60s came around, Australia was already expanding its outlook - politically, economically, and culturally - and central to this were the events of 1956.

This was the year when Melbourne hosted the Summer Olympics, the first edition of the Games to be held outside Europe and North America. It also heralded the arrival of television in Australia. In this year, Prime Minister Robert Menzies grappled with world politics, when he opened the country's doors to refugees from the Hungarian uprising, allowed British nuclear tests at Maralinga, and tried to resolve the greatest diplomatic episode of the decade- the Suez Crisis. In these ways and more, the world came to Australia's doorstep in 1956, challenging rusted-on habits and indelibly shifting the nation's perception of itself.

Nick Richardson peels back the layers to reveal Australia at a critical moment in time. He brilliantly recreates the broader events surrounding the Melbourne Olympics at the end of 1956, as well as the dramas of the Games themselves. Throughout, he also follows a range of men and women who were touched by this transformation, to illuminate the personal consequences of being part of Australia's pivotal year.