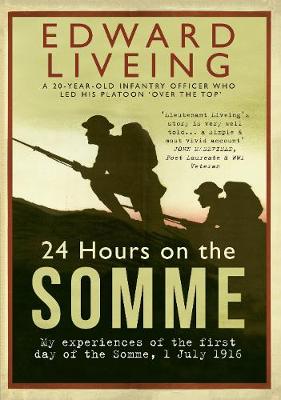 24 Hours on the Somme

Description - 24 Hours on the Somme by Edward Liveing

There are many accounts of the Battle of the Somme by surviving British soldiers. But the Somme was not a single battle but a series of offensives and small localised attacks fought over four and a half months. What is etched into the British psyche is the huge loss of life suffered by the 'poor bloody infantry' on the first day of the Somme, 1 July 1916. The carnage was such that few survived to tell the tale of that first horrific day and the existing published memoirs are about later in the Battle or by non-infantry troops who while involved in the offensive, didn't actually go 'over the top'. What is also unique about Edward Liveing's vivid and detailed account is that it begins the evening before the attack and ends close to 24 hours later and is entirely focussed on the first day of the Somme. A young junior officer in the London Regiment on the battlefield that infamous day, he was in command of a platoon of about fifty men, when he scaled the crest of his trench into no-mans land. Edward Liveing's account is known and has been quoted from, but unbelievably this is the first time since it's publication in the USA in 1918 that it has been republished in its full, horrific, unexpunged glory. Newly illustrated and endorsed by Lieutenant Liveing's family, 24 Hours on the Somme is the ideal book to commemorate the sacrifice made a century ago this July.

A Preview for this title is currently not available.
More Books By Edward Liveing
View All

On Megrim, Sick-Headache, and Some Allied Disorders: A Contribution to the Pathology of Nerve-Storms
Edward Liveing
Hardback , Oct '18
RRP: $112.73 $101.46