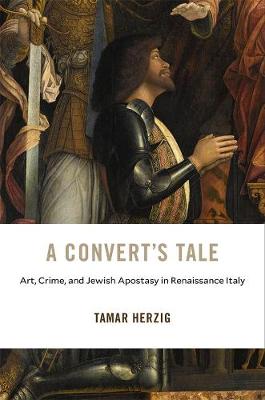 An intimate portrait, based on newly discovered archival sources, of one of the most famous Jewish artists of the Italian Renaissance who, charged with a scandalous crime, renounced his faith and converted to Catholicism.

In 1491 the renowned goldsmith Salomone da Sesso converted to Catholicism. Born in the mid-fifteenth century to a Jewish family in Florence, Salomone later settled in Ferrara, where he was regarded as a virtuoso artist whose exquisite jewelry and lavishly engraved swords were prized by Italy's ruling elite. But rumors circulated about Salomone's behavior, scandalizing the Jewish community, who turned him over to the civil authorities. Charged with sodomy, Salomone was sentenced to die but agreed to renounce Judaism to save his life. He was baptized, taking the name Ercole ?de' Fedeli? (?One of the Faithful?). With the help of powerful patrons like Duchess Eleonora of Aragon and Duke Ercole d'Este, his namesake, Ercole lived as a practicing Catholic for three more decades. Drawing on newly discovered archival sources, Tamar Herzig traces the dramatic story of his life, half a century before ecclesiastical authorities made Jewish conversion a priority of the Catholic Church.

A Convert's Tale explores the Jewish world in which Salomone was born and raised; the glittering objects he crafted, and their status as courtly hallmarks; and Ercole's relations with his wealthy patrons. Herzig also examines homosexuality in Renaissance Italy, the response of Jewish communities and Christian authorities to allegations of sexual crimes, and attitudes toward homosexual acts among Christians and Jews. In Salomone/Ercole's story we see how precarious life was for converts from Judaism, and how contested was the meaning of conversion for both the apostates' former coreligionists and those tasked with welcoming them to their new faith.

A Preview for this title is currently not available.
More Books By Tamar Herzig
View All