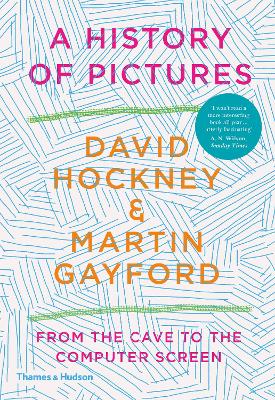 A History of Pictures: From the Cave to the Computer Screen

Description - A History of Pictures: From the Cave to the Computer Screen by David Hockney

'Enormously good-humoured and entertaining... Hockney asks big questions about the nature of picture-making and the relationship between painters and photography in a way that no other contemporary artists seems to.' Andrew Marr, New Statesman

Informed and energized by a lifetime of painting, drawing and making images with cameras, David Hockney, in collaboration with the art critic Martin Gayford, explores how and why pictures have been made across the millennia. What makes marks on a flat surface interesting? How do you show movement in a still picture, and how, conversely, do films and television connect with old masters?

Juxtaposing a rich variety of images - a still from a Disney cartoon with a Japanese woodblock print by Hiroshige, a scene from an Eisenstein film with a Velazquez painting - the authors cross the normal boundaries between high culture and popular entertainment, and make unexpected connections across time and media. Building on Hockney's groundbreaking book Secret Knowledge, they argue that film, photography, painting and drawing are deeply interconnected. Insightful and thought provoking, A History of Pictures is an important contribution to our appreciation of how we represent our reality. This new edition has a revised final chapter with some of Hockney's latest works, including the stained-glass window in Westminster Abbey.

Buy A History of Pictures: From the Cave to the Computer Screen by David Hockney from Australia's Online Independent Bookstore, BooksDirect.

Other Editions - A History of Pictures: From the Cave to the Computer Screen by David Hockney A Preview for this title is currently not available.
More Books By David Hockney
View All