A Life in Movies: Stories from 50 years in Hollywood

Description - A Life in Movies: Stories from 50 years in Hollywood by Irwin Winkler

The list of films Irwin Winkler has produced in his more-than-50-year career is extraordinary:Rocky,Goodfellas, Raging Bull, Creed. His films have been nominated for 52 Academy Awards, includingfive movies for Best Picture, and have won 12. And Winkler is still working. Creed II,starring MichaelB. Jordan, opens this fall, followed by Martin Scorsese'sThe Irishman, a major mafia saga for Netflixstarring Robert De Niro and Al Pacino. InA Life in Movies, his charming and insightful memoir, Winkler tells the stories of his careerthrough his many films as a producer and then as a writer and director, charting the changes inHollywood over the past decades. Winkler started in the famous William Morris mailroom and made hisfirst film-starring Elvis-in the last days of the old studio system. Beginning in the late 1960s, and thenfor decades to come, he produced a string of provocative andinfluential films, making him one of the most critically lauded,prolific, and commercially successfulproducers of his era. This is an engrossing and candid book, a beguilingexploration of what it means to be a producer, from howrights get purchased and scripts developed to actors cast,directors managed, film edited, and awards won. Filled withtales of legendary and beloved films, as well as some not-so-legendaryand forgotten ones,A Life in Moviestakes readersbehind the scenes and into the history of Hollywood.Irwin Winkler is an American film producer, writer, and director. He is the recipient of numerous American and international honors.

Buy A Life in Movies: Stories from 50 years in Hollywood by Irwin Winkler from Australia's Online Independent Bookstore, BooksDirect.

Other Editions - A Life in Movies: Stories from 50 years in Hollywood by Irwin Winkler 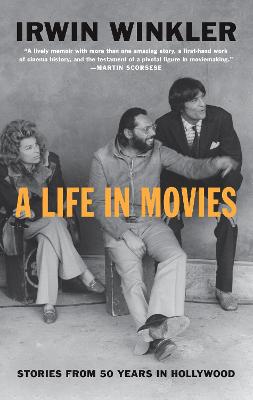 A Preview for this title is currently not available.
More Books By Irwin Winkler
View All