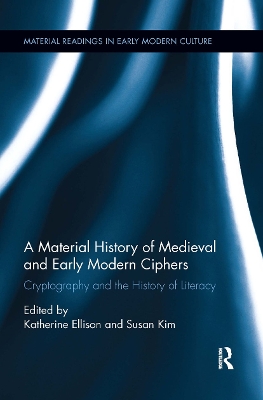 A Material History of Medieval and Early Modern Ciphers: Cryptography and the History of Literacy

Description - A Material History of Medieval and Early Modern Ciphers: Cryptography and the History of Literacy by Ellison Ellisonw

The first cultural history of early modern cryptography, this collection brings together scholars in history, literature, music, the arts, mathematics, and computer science who study ciphering and deciphering from new materialist, media studies, cognitive studies, disability studies, and other theoretical perspectives. Essays analyze the material forms of ciphering as windows into the cultures of orality, manuscript, print, and publishing, revealing that early modern ciphering, and the complex history that preceded it in the medieval period, not only influenced political and military history but also played a central role in the emergence of the capitalist media state in the West, in religious reformation, and in the scientific revolution. Ciphered communication, whether in etched stone and bone, in musical notae, runic symbols, polyalphabetic substitution, algebraic equations, graphic typographies, or literary metaphors, took place in contested social spaces and offered a means of expression during times of political, economic, and personal upheaval. Ciphering shaped the early history of linguistics as a discipline, and it bridged theological and scientific rhetoric before and during the Reformation. Ciphering was an occult art, a mathematic language, and an aesthetic that influenced music, sculpture, painting, drama, poetry, and the early novel. This collection addresses gaps in cryptographic history, but more significantly, through cultural analyses of the rhetorical situations of ciphering and actual solved and unsolved medieval and early modern ciphers, it traces the influences of cryptographic writing and reading on literacy broadly defined as well as the cultures that generate, resist, and require that literacy. This volume offers a significant contribution to the history of the book, highlighting the broader cultural significance of textual materialities.

Buy A Material History of Medieval and Early Modern Ciphers: Cryptography and the History of Literacy by Ellison Ellisonw from Australia's Online Independent Bookstore, BooksDirect.

Other Editions - A Material History of Medieval and Early Modern Ciphers: Cryptography and the History of Literacy by Ellison Ellisonw 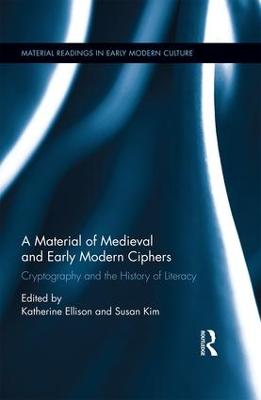 A Preview for this title is currently not available.
More Books By Ellison Ellisonw
View All