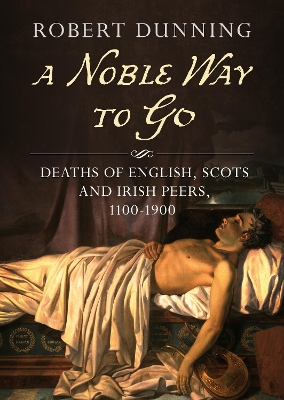 Description - A Noble Way To Go: Deaths of English, Scots and Irish Peers 1100-1900 by Robert Dunning

Owners of estates and titles in the peerages of England, Scotland and Ireland were more, rather than less, likely than ordinary people to experience dramatic and gruesome deaths and certainly more likely to have them recorded. This study, drawing on the pages of 'The Complete Peerage', describes some 7,000 such deaths, revealing when, where and how they occurred and how they were commemorated. In the Middle Ages, war, execution, imprisonment, plague, poison and sheer misfortune brought an end to many noble lives. In the sixteenth century wars, executions and murders continued to take their toll alongside 'affrays' or 'skirmishes' so often blamed for deaths in Scotland and Ireland; and ill-health in amazing variety. Wars at home, at sea and abroad were fatal for many in the seventeenth century, wars overseas in the eighteenth, but by then death from too much food or drink was much more common and death in fashionable mansions in London's west end more usual than in ancestral castles. In the nineteenth century came deaths in remarkable places, sometimes very suspicious.

A Preview for this title is currently not available.
More Books By Robert Dunning
View All