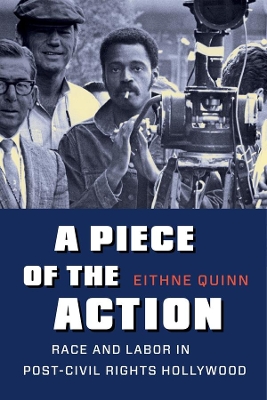 A Piece of the Action: Race and Labor in Post-Civil Rights Hollywood

Description - A Piece of the Action: Race and Labor in Post-Civil Rights Hollywood by Eithne Quinn

Hollywood is often thought of?and certainly by Hollywood itself?as a progressive haven. However, in the decade after the passage of the Civil Rights Act, the film industry grew deeply conservative when it came to conflicts over racial justice. Amid black self-assertion and white backlash, many of the most heated struggles in film were fought over employment. In A Piece of the Action, Eithne Quinn reveals how Hollywood catalyzed wider racial politics, through representation on screen as well as in battles over jobs and resources behind the scenes.

Based on extensive archival research and detailed discussions of films like In the Heat of the Night, Sweet Sweetback's Baadasssss Song, Super Fly, Claudine, and Blue Collar, this volume considers how issues of race and labor played out on the screen during the tumultuous early years of affirmative action. Quinn charts how black actors leveraged their performance capital to force meaningful changes to employment and film content. She examines the emergence of Sidney Poitier and other African Americans as A-list stars; the careers of black filmmakers such as Melvin Van Peebles and Ossie Davis; and attempts by the federal government and black advocacy groups to integrate cinema. Quinn also highlights the limits of Hollywood's liberalism, showing how predominantly white filmmakers, executives, and unions hid the persistence of racism behind feel-good stories and public-relations avowals of tolerance. A rigorous analysis of the deeply rooted patterns of racial exclusion in American cinema, A Piece of the Action sheds light on why conservative and corporate responses to antiracist and labor activism remain pervasive in today's Hollywood.

Buy A Piece of the Action: Race and Labor in Post-Civil Rights Hollywood by Eithne Quinn from Australia's Online Independent Bookstore, BooksDirect.

Other Editions - A Piece of the Action: Race and Labor in Post-Civil Rights Hollywood by Eithne Quinn A Preview for this title is currently not available.
More Books By Eithne Quinn
View All