Ridiculous Australian tales of sporting stuff-ups and forgiveness by the bestselling author of A Thoroughly Unhelpful History of Australian Sport.

In sport, the term 'good bloke' doesn't mean what it says. Like 'fun run', it often actually means exactly the opposite.

Titus O'Reily, the sports historian Australia neither needs nor deserves, examines why our nation's sportspeople are so readily forgiven for doing terrible things.

With ridiculous tales from Australia's chequered sporting history, A Sporting Chance dissects the scandals big and small, the mistakes made in covering them up and the path athletes tread back to redemption. From the Essendon supplements saga and the sandpaper-loving Australian cricket team to whatever it is Nick Kyrgios has done now, Titus reveals the archetypes at the heart of our greatest sporting scandals.

There's the corrupt cop who gave us the race that stopped a nation and the boxing champion who refused to train. There's the cashed-up businessmen who bankrupted clubs and the commentators who can't get their foot out of their mouth. And of course there's the good blokes, like Wayne Carey, Matthew Johns and Shane Warne, who it seems we'll forgive for absolutely anything.

In his rambling and at times incoherent style, Titus asks the question- are Australians really that forgiving of their sporting heroes? With the rise of social media, women's sport and the drive towards greater equality, are the good blokes of Australia's sporting landscape an endangered species?

Other Editions - A Sporting Chance by Titus O'Reily 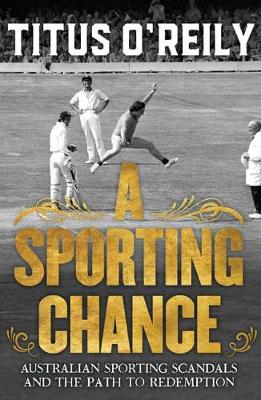 A Preview for this title is currently not available.
More Books By Titus O'Reily
View All