Across the World with the Johnsons

Visual Culture and American Empire in the Twentieth Century

Description - Across the World with the Johnsons by Prue Ahrens

During the interwar period Osa and Martin Johnson became famous for their films that brought exotic and far-off locations to the American cinema. Before the advent of mass tourism and television, their films played a major part in providing the means by which large audiences in the US and beyond became familiar with distant and 'wild' places across the world. Taking the celebrity of the Johnsons as its case study, this book investigates the influence of these new forms of visual culture, showing how they created their own version of America's imperial drama. By representing themselves as benevolent figures engaged in preserving on film the world's last wild places and peoples, the Johnsons' films educated US audiences about their apparent destiny to rule, contributing significantly to the popularity of empire. Bringing together research in the fields of film and politics - including gender and empire, historical anthropology, photography and visual studies - this book provides a comprehensive evaluation of the Johnsons, their work and its impact. It considers the Johnsons as a celebrity duo, their status as national icons, how they promoted themselves and their expeditions, and how their careers informed American expansionism, thus providing the first scholarly investigation of this remarkable couple and their extensive output over nearly three decades and across several continents.

Buy Across the World with the Johnsons by Prue Ahrens from Australia's Online Independent Bookstore, BooksDirect.

Other Editions - Across the World with the Johnsons by Prue Ahrens 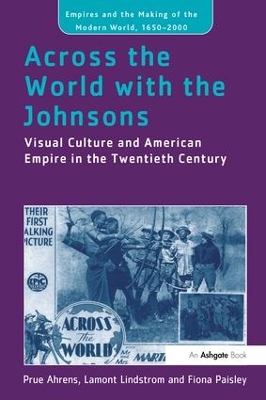 A Preview for this title is currently not available.
More Books By Prue Ahrens
View All