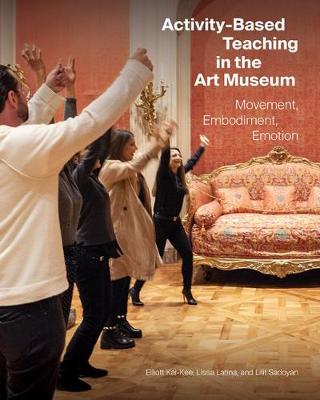 This groundbreaking book explores why and how to encourage physical and sensory engagement with works of art.

An essential resource for museum professionals, teachers, and students, the award winning Teaching in the Art Museum (Getty Publications, 2011) set a new standard in the field of gallery education. This follow-up book blends theory and practice to help educators-from teachers and docents to curators and parents-create meaningful interpretive activities for children and adults.

Written by a team of veteran museum educators, Activity-Based Teaching in the Art Museum offers diverse perspectives on embodiment, emotions, empathy, and mindfulness to inspire imaginative, spontaneous interactions that are firmly grounded in history and theory. The authors begin by surveying the emergence of activity-based teaching in the 1960s and 1970s and move on to articulate a theory of play as the cornerstone of their innovative methodology. The volume is replete with sidebars describing activities facilitated with museum visitors of all ages.

1 The Modern History of Presence and Meaning
A philosophical shift from a language-based understanding of the world to direct, physical interaction with it.

2 A New Age in Museum Education: The 1960s and 1970s
A brief history of some of the innovative museum education programs developed in the United States in the late 1960s and 1970s. The sudden and widespread adoption of nondiscursive gallery activities during this period, especially but not exclusively in programs designed for younger students and school groups, expressed the spirit of the times.

3 Starts and Stops
Two attempts by American museum educators to articulate a theory for their new, nondiscursive programs: the first deriving from the early work of Project Zero, the Harvard Graduate School of Education program founded by the philosopher Nelson Goodman to study arts learning as a cognitive activity; the second stemming from the work of Viola Spolin, the acclaimed theater educator and coach whose teaching methods, embodied in a series of "theater games," were detailed in her well-known book Improvisation for the Theater (1963).

4 A Theory of Play in the Museum
A theory of play that posits activities in the museum as forms of play that take place in spaces (or "playgrounds") temporarily designated as such by educators and their adult visitors or students. Play is defined essentially as movement-both physical and imaginary (metaphorical)-toward and away from, around, and inside and outside the works of art that are foregrounded within those spaces. Gallery activities conceived in this way respond to the possibilities that the objects themselves offer for the visitor to explore and engage with them. The particular movements characterizing an activity are crucially conditioned by the object in question; they constitute a process of discovery and learning conceptually distinct from, but supportive of, traditional dialogue-based modes of museum education, which they supplement rather than supplant.

5 Embodiment, Affordances
The idea of embodiment adopted here recognizes that both mind and body are joined in their interactions with things. Investigating works of art thus involves apprehending them physically as well as intellectually-in the sense of responding to the ways in which a particular work allows and even solicits the viewer's physical grasp of it.

6 Skills
Ways in which objects present themselves to us, as viewers, and what we might do in response as they fit with the bodily skills we have developed over the course of our lives. Such skills might be as simple as getting dressed, washing, or eating; or as specialized as doing one's hair, dancing, playing an instrument, or acting-all of which may allow us to "grasp" and even feel that we inhabit particular works of art.

7 Movement
Embodied looking is always looking from somewhere. We apprehend objects as we physically move around and in front of them; they reveal themselves differently as we approach them from different viewpoints. Viewers orient themselves spatially to both the surfaces of objects and to the things and spaces depicte4d in or suggested by representational works of art. Activity-based teaching gets visitors and students to move among the objects-away from them, close to them, and even into them.

8 The Senses
Both adult visitors and younger students come to the museum expecting to use their eyes, yet "visual" art appeals to several of the senses at once, though rarely to the same degree. Sculpture, for example, almost always appeals to touch (whether or not that is actually possible or allowed) as well as sight. A painting depicting a scene in which people appear to be talking may induce viewers to not only look but also "listen" to what the figures might be saying.

9 Drawing in the Museum
Looking at art with a pencil in hand amplifies viewers' ability to imaginatively touch and feel their way across and around an artwork. Contour drawing by its nature requires participants to imagine that they are touching the contours of an object beneath the tips of their pencils. Other types of drawing allow viewers to feel their way around objects through observation and movement.

10 Emotion
Visitors' emotional responses to art represent a complex process with many components, from physiological to cognitive, and a particular work of art may elicit a wide range of emotional reactions. This chapter describes specific ways in which museum educators can go well beyond merely asking visitors how a work of art makes them feel.

11 Empathy and Intersubjectivity
One aspect of viewers' emotional responses to art that is often taken for granted, if not neglected altogether: the empathetic connections that human beings make to images of other people. This chapter advocates an approach that prompts viewers to physically engage with the representations of people they see.

12 Mindful Looking
Mindfulness involves awareness and attention, both as a conscious practice and as an attitude that gallery teachers can encourage in museum visitors. This is not solely a matter of cultivating the mind, however; it is also a matter of cultivating the body, since mindfulness is only possible when mind and body are in a state of harmonious, relaxed attentiveness. Mindfulness practice in the art museum actively directs the viewer's focus on the object itself and insists on returning to it over and over; yet it also balances activity with conscious stillness.