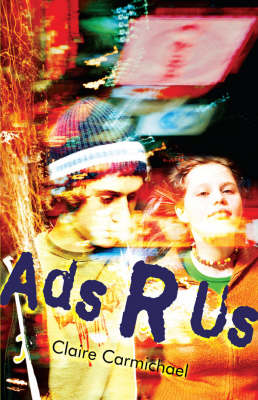 "If you think life is intense now, for Taylor and Barrett it s, like, totally dire!"

"ADS R US is set in a modern industrialised city in the near future, where advertising is a constant stream of inescapable information, and corporations sponsor everything from music to schools. Barrett Trent has been raised outside the mainstream society in a Luddite cult called Simplicity, but following the death of his uncle, he goes to live in the city with his Aunt Cara, Uncle Adrian and cousin, Taylor. But his aunt and uncle have a hidden agenda - they work for a company called Ads for Life, which promotes advertising and uses it covertly for political gain. They see Barrett as the perfect guinea pig for their experiments into the effect of advertising on an untouched mind. But Barrett may prove harder to crack than they think "