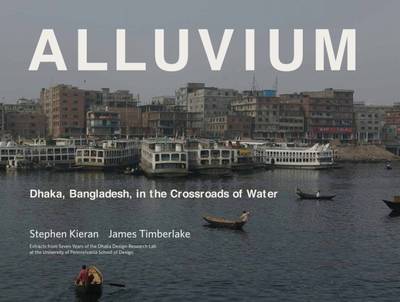 Dhaka, Bangladesh in the Crossroads of Water

Dhaka, Bangladesh, in the Crossroads of Water Imagine the most extreme urban environment on earth a place three times as dense as Manhattan, enveloped in a constant flow of water, beset by a relentless stream of rural migrants, plagued by annual monsoons, and threatened by climate change. A place where the very earth beneath your feet is constantly shifting from dry to wet, where categories like dry and wet in fact mean very little, since most of what exists is somewhere in between. This is Dhaka, capital city of Bangladesh. Home to 14 million. Since 2007, architects Stephen Kieran and James Timberlake have directed a design-research laboratory on Dhaka for graduate students at the University of Pennsylvania School of Design. What began as a desire to help a city in need became an immersion in investigating its ebbs and flows, mapping its urban systems, and charting its development via annual visits. The result of this extended study is Alluvium: Dhaka, Bangladesh, in the Crossroads of Water, a cross-genre book that incorporates diverse media and layers of narrative and analysis to encourage new readings and perspectives. The book includes first-person narratives by architects and planners, documentary photographs, and maps and infographics that visually represent the intricate connections between people, water, land, and health in this deltaic megacity. The work proposes a new approach to understanding place that is interwoven with human interest an intimate, collaborative, research-based model that holds relevance for both the developing and developed worlds." AUTHOR: Stephen Kieran and James Timberlake are founding partners of the internationally recognized, research-driven architecture firm KieranTimberlake. They were inaugural recipients of the pres-tigious Benjamin Latrobe Fellowship for architectural design research from the AIA College of Fellows in 2001.

A Preview for this title is currently not available.
More Books By James Timberlake
View All