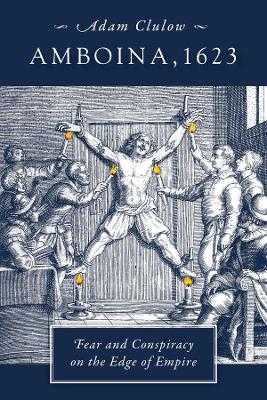 Amboina, 1623: Fear and Conspiracy on the Edge of Empire

Description - Amboina, 1623: Fear and Conspiracy on the Edge of Empire by Adam Clulow

In 1623, a Japanese mercenary called Shichiz?? was arrested for asking suspicious questions about the defenses of a Dutch East India Company fort on Amboina, a remote set of islands in what is now eastern Indonesia. When he failed to provide an adequate explanation, he was tortured until he confessed that he had joined a plot orchestrated by a group of English merchants based nearby to seize control of the fortification and ultimately to rip the spice-rich islands from the Company's grasp. Two weeks later, Dutch authorities executed twenty-one alleged conspirators, sparking immediate outrage and a controversy that would endure for centuries to come.

In this landmark study, Adam Clulow presents a new perspective on the Amboina case that aims to move beyond the standard debate over the guilt or innocence of the supposed plotters. Instead, Amboina, 1623 argues that the case was driven forward by a potent combination of genuine crisis and overpowering fear that propelled the rapid escalation from suspicion to torture, that gave shape and form to an imagined plot, and that pushed events forward to their final bloody conclusion. Based on an exhaustive analysis of original trial documents, letters, and depositions, this book offers a masterful reinterpretation of a trial that has divided opinion for centuries while presenting new insight into global history and the nature of European expansion across the early modern world.

Buy Amboina, 1623: Fear and Conspiracy on the Edge of Empire by Adam Clulow from Australia's Online Independent Bookstore, BooksDirect.

A Preview for this title is currently not available.
More Books By Adam Clulow
View All