An Epistemology of Religion and Gender: Biopolitics, Performativity and Agency

Description - An Epistemology of Religion and Gender: Biopolitics, Performativity and Agency by Ulrike E. Auga

This book puts forward a new epistemological framework for a theory of religion and gender's role in the public sphere. It provides a sophisticated understanding of gender and its relation to religion as a primarily performative category of knowledge production, rooting that understanding in case studies from around the world.

Gender and religion are examined alongside biopolitics and the influence of capitalism, neoliberalism and empire. The book analyses the interdependence of religion, gender and new nationalisms in the Palestinian territories, South Africa and the USA, scrutinising the biopolitical interferences of nation states and dominant political and religious institutions. It then moves on to uncover counter-discourses and spaces of activism and agency in contexts such as East Germany and the Occupy Wall Street movement. Using gender, queer and trans theory in tandem with postcolonial and post-secular perspectives, readers are shown a more nuanced understanding of critical contemporary questions related to religion, gender and sexuality.

This is a bold new take on religion, gender and public life. As such, it will be of keen interest to scholars of Religious Studies and Gender Studies, as well as those working on religion's interaction with Politics, Sociology and Social Activism.

Other Editions - An Epistemology of Religion and Gender: Biopolitics, Performativity and Agency by Ulrike E. Auga 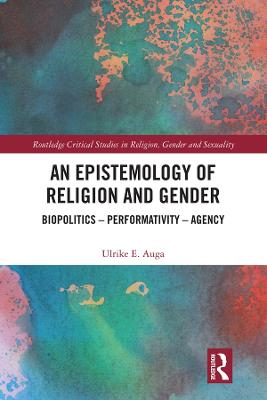 A Preview for this title is currently not available.
More Books By Ulrike E. Auga
View All