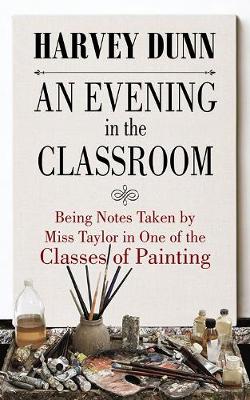 An Evening in the Classroom: Being Notes Taken by Miss Taylor in One of the Classes of Painting

Description - An Evening in the Classroom: Being Notes Taken by Miss Taylor in One of the Classes of Painting by Harvey Dunn

Harvey Dunn, a former student of Howard Pyle, was teaching at both the Grand Central School of Art and the Art Students League in 1934 when one of his students began recording his comments and criticisms, later publishing them in a slim, limited-edition volume. Accompanied by Dunn's woodcut images, the book provides a wonderful re-creation of the atmosphere at Pyle's celebrated Brandywine school. N. C. Wyeth, Frank Schoonover, Violet Oakley, and Jessie Willcox Smith also studied under Pyle, but Dunn was the most influential teacher and this hardcover edition preserves the very best of his approach and critiques. AUTHOR: American painter, illustrator, and teacher Harvey Dunn (1884 1952) spent two years as Howard Pyle's student before setting up his own studio. In addition to contributing to periodicals such as The Saturday Evening Post and Harper's Monthly, Dunn served during World War I, traveling with active units and sketching on location. He taught at the Art Students League and elsewhere as well as from his own studio.

Buy An Evening in the Classroom: Being Notes Taken by Miss Taylor in One of the Classes of Painting by Harvey Dunn from Australia's Online Independent Bookstore, BooksDirect.

A Preview for this title is currently not available.
More Books By Harvey Dunn
View All