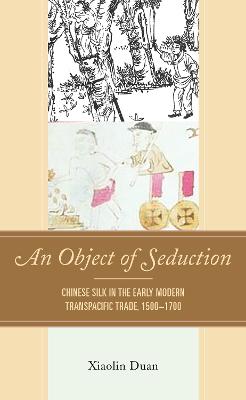 An Object of Seduction: Chinese Silk in the Early Modern Transpacific Trade, 1500-1700

Description - An Object of Seduction: Chinese Silk in the Early Modern Transpacific Trade, 1500-1700 by Xiaolin Duan

In 1573, 712 bales of Chinese silk arrived in New Spain in the cargos of two Manila galleons. The emergence and the subsequent rapid development of this trans-Pacific silk trade reflected the final formation of the global circulation network. The first book-length English-language study focusing on the early modern export of Chinese silk to New Spain from the sixteenth to the seventeenth century, An Object of Seduction compares and contrasts the two regions from perspectives of the sericulture development, the widespread circulation of silk fashion, and the government attempts at regulating the use of silk. Xiaolin Duan argues that the increasing demand for silk on the worldwide market on the one hand contributed to the parallel development of silk fashion and sericulture in China and New Spain, and on the other hand created conflicts on imperial regulations about foreign trade and hierarchical systems. Incorporating evidence from local gazetteers, correspondence, manual books, illustrated treatises, and miscellanies, An Object of Seduction explores how the growing desire for and production of raw silk and silk textiles empowered individuals and societies to claim and redefine their positions in changing time and space, thus breaking away from the traditional state control.

A Preview for this title is currently not available.
More Books By Xiaolin Duan
View All