And How Are You, Dr. Sacks?: A Biographical Memoir of Oliver Sacks

Description - And How Are You, Dr. Sacks?: A Biographical Memoir of Oliver Sacks by Lawrence Weschler

Lawrence Weschler began spending time with Oliver Sacks in the early 1980s, when he set out to profile him for The New Yorker. Almost a decade earlier, Dr. Sacks had published his masterpiece Awakenings but the book had hardly been an immediate success, and the rumpled clinician was still largely unknown. Over the ensuing four years, the two men worked closely together until Sacks asked Weschler to abandon the profile, a request to which Weschler acceded. The two remained close friends, however, across the next thirty years and then, just as Sacks was dying, he urged Weschler to take up the project once again. This book is the result of that entreaty.

Weschler sets Sacks's brilliant table talk and extravagant personality in vivid relief. We see Sacks rowing and ranting and caring deeply; composing the essays that would form The Man Who Mistook His Wife for a Hat; recalling his turbulent drug-fueled younger days; helping his patients and exhausting his friends; and waging intellectual war against a medical and scientific establishment that failed to address his greatest concern: the spontaneous specificity of the individual human soul. And all the while he is pouring out a stream of glorious, ribald, hilarious, and often profound conversation that establishes him as one of the great talkers of the age.

Buy And How Are You, Dr. Sacks?: A Biographical Memoir of Oliver Sacks by Lawrence Weschler from Australia's Online Independent Bookstore, BooksDirect.

Other Editions - And How Are You, Dr. Sacks?: A Biographical Memoir of Oliver Sacks by Lawrence Weschler 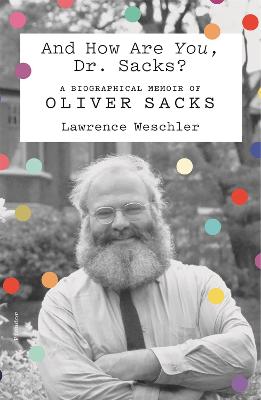 A Preview for this title is currently not available.
More Books By Lawrence Weschler
View All