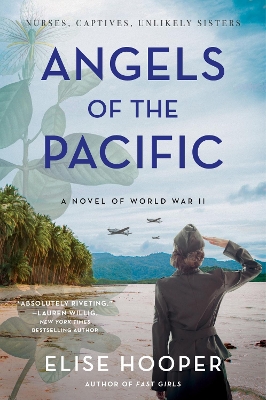 Angels of the Pacific: A Novel of World War II

Description - Angels of the Pacific: A Novel of World War II by Elise Hooper


"Absolutely riveting. A stay-up-all night read about two very different women who discover just how strong they can be-and just how much they'll dare-during the brutal Japanese occupation of the Philippines in World War II. This story of endurance and sisterhood will have you turning pages late into the night." -Lauren Willig, New York Times bestselling author

If you loved Beantown Girls by Jane Healey and Hazel Gaynor's When We Were Young & Brave, then you won't want to miss critically acclaimed author Elise Hooper's powerful new novel of the Angels of Bataan, nurses held as prisoners during the occupation of the Philippines in World War II.

Their survival would depend on sisterhood and service.

Inspired by the extraordinary true stories of World War II's American Army nurses famously known as the Angels of Bataan and the unsung contributions of Filipinas of the resistance, this novel transports us to a remarkable era of hope, bravery, perseverance, and ultimately-victory.

The Philippines, 1941: Tess Abbott, an American Army nurse, has fled the hardships of the Great Depression at home for the glamour and adventure of Manila, one of the most desirable postings in the world. But everything changes when the Japanese Imperial Army invades with lightning speed and devastating results. Tess and her band of nurses serve on the front lines until they are captured as prisoners of war and held behind the high stone walls of Manila's Santo Tomas Internment Camp.

When the Japanese occupation of her beloved homeland commences, Flor Dalisay, a Filipina university student, will be drawn into the underground network of resistance, discovering within herself reserves of courage, resilience, and leadership she never knew she possessed.

As the war continues, Tess and Flor face danger, deprivation, and terror, leading them into a web of danger as they unexpectedly work together to save lives and win their freedom.

Buy Angels of the Pacific: A Novel of World War II by Elise Hooper from Australia's Online Independent Bookstore, BooksDirect.

Other Editions - Angels of the Pacific: A Novel of World War II by Elise Hooper A Preview for this title is currently not available.
More Books By Elise Hooper
View All