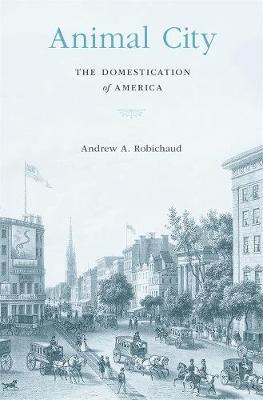 Animal City: The Domestication of America

Description - Animal City: The Domestication of America by Andrew A. Robichaud

Why do America's cities look the way they do? If we want to know the answer, we should start by looking at our relationship with animals.

Americans once lived alongside animals. They raised them, worked them, ate them, and lived off their products. This was true not just in rural areas but also in cities, which were crowded with livestock and beasts of burden. But as urban areas grew in the nineteenth century, these relationships changed. Slaughterhouses, dairies, and hog ranches receded into suburbs and hinterlands. Milk and meat increasingly came from stores, while the family cow and pig gave way to the household pet. This great shift, Andrew Robichaud reveals, transformed people's relationships with animals and nature and radically altered ideas about what it means to be human.

As Animal City illustrates, these transformations in human and animal lives were not inevitable results of population growth but rather followed decades of social and political struggles. City officials sought to control urban animal populations and developed sweeping regulatory powers that ushered in new forms of urban life. Societies for the Prevention of Cruelty to Animals worked to enhance certain animals' moral standing in law and culture, in turn inspiring new child welfare laws and spurring other wide-ranging reforms.

The animal city is still with us today. The urban landscapes we inhabit are products of the transformations of the nineteenth century. From urban development to environmental inequality, our cities still bear the scars of the domestication of urban America.