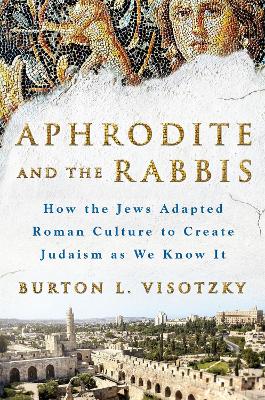 Aphrodite and the Rabbis

Description - Aphrodite and the Rabbis by Burton L. Visotzky

Hard to believe but true:

- The Passover Seder is a Greco-Roman symposium banquet
- The Talmud rabbis presented themselves as Stoic philosophers
- Synagogue buildings were Roman basilicas
- Hellenistic rhetoric professors educated sons of well-to-do Jews
- Zeus-Helios is depicted in synagogue mosaics across ancient Israel
- In Israel there were synagogues where the prayers were recited in Greek.

Historians have long debated the (re)birth of Judaism in the wake of the destruction of Jerusalem and the Temple cult by the Romans in 70 CE. What replaced that sacrificial cult was at once something new, even as it also sought to preserve what little it could of the old Israelite religion.

Arguing that its transformation from a Jerusalem-centered cult to a world religion was made possible by the Roman Empire, Rabbi Burton Visotzky presents Judaism as a distinctly Roman religion. Full of fascinating detail from the daily life and culture of Jewish communities across the Hellenistic world, Aphrodite and the Rabbis will appeal to anyone interested in the development of Judaism, religion, history, art and architecture.

A Preview for this title is currently not available.
More Books By Burton L. Visotzky
View All