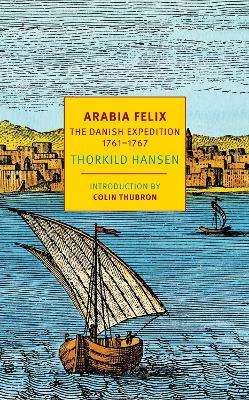 Arabia Felix is the spellbinding true story of a scientific expedition gone disastrously astray. On a winter morning in 1761 six men leave Copenhagen by sea-a botanist, a philologist, an astronomer, a doctor, an artist, and their manservant-an ill-assorted band of men who dislike and distrust one another from the start. These are the members of the first Danish expedition to Arabia Felix, as Yemen was then known, the first organized foray into a corner of the world unknown to Europeans, an enterprise that had the support of the Danish Crown and was keenly followed throughout Europe. The expedition made its way to Turkey and Egypt, by which time its members were already actively seeking to undercut and even kill one another, before disappearing into the harsh desert that was their destination. Nearly seven years later a single survivor returned to Denmark to find himself a forgotten man and all the specimens that had been sent back ruined by neglect.

Based on diaries, notebooks, and sketches that lay unread in Danish archives until the twentieth century, Arabia Felix is both a comedy of intellectual rivalry and very bad manners and an utterly absorbing tale of high adventure.

A Preview for this title is currently not available.
More Books By Colin Thubron
View All