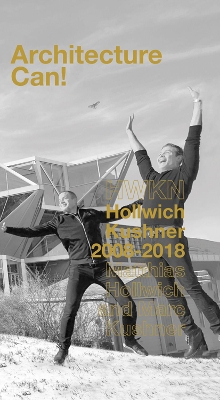 "Architecture is not preserved in a museum - it is the museum." Architecture Can! is an intriguing journey through the works and projects of the groundbreaking architecture firm Hollwich Kushner, based in New York. Partners Matthias Hollwich and Marc Kushner design projects at every scale: intimate, awe-inspiring, and everything inbetween; from residences to universities, museums, and urban plans. As two founders of leading architecture social media network Architizer, Hollwich and Kushner frankly admit the power of social media in contemporary architecture practice. Images of new and advanced buildings and concepts travel the globe at high speed, influencing a new generation of projects before the previous generation has broken ground. To stand out, they believe, architecture must "empower people to engage with others, to produce memorable experiences, and to live with a sense of wonder". AUTHORS: Matthias Hollwich and Marc Kushner founded Hollwich Kushner, a leading architecture firm based in Lower Manhattan and winners of the prestigious MoMA/PS1 Young Architects Program where they built Wendy. The firm has gone on to design projects at every scale: intimate to awe-inspiring, and everything in between. Hollwich Kushner creates forward-looking buildings that place people first. They are a new kind of architecture firm that believes in entrepreneurship - they founded Architizer.com and were named one the world's Most Innovative Companies by Fast Company. SELLING POINTS: . Humorous, resolute, and always looking to the future, Hollwich and Kushner advocate for architecture at every opportunity, believing that "Better buildings make a better world" . The authors are among the most prominent and sophisticated users of social media in architecture and include social media images in the book 290 colour photographs

A Preview for this title is currently not available.
More Books By Matthias Hollwich
View All