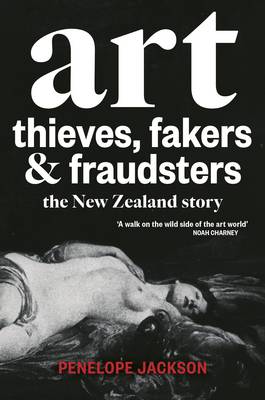 This meticulously researched, landmark book is the first to look at an often hidden part of New Zealand's art history and cultural landscape- art crime. It encompasses theft, forgery, fraud, smuggling and vandalism.

Penelope Jackson documents New Zealand's most scandalous art crimes of the last 100 years - some notorious but others covered up by embarrassed owners and institutions. They include a near-life-sized nude mysteriously stolen from the Christchurch's McDougall Art Gallery and never seen again; an international court battle around ownership of major Italian paintings stolen from their Jewish owners by the Nazis, bought by a NZ soldier during WWII and later sold to Dunedin Public Art Gallery; a leading NZ painter who sold copies of his work as originals; paintings illegally sold by an unscrupulous art dealer; a blatant theft from the Auckland Art Gallery, and the embarrassing rip-offs by Goldie forger Karl Sim.

Jackson shows that NZ is far from immune to the criminal activities increasingly affecting art around the world. 2015 saw the establishment of the NZ Art Crime Research Trust, of which Jackson is a founding trustee. Art Thieves, Fakes and Fraudsters will be launched first at the September 30 opening of a major art crime exhibition, The Empty Frame, at Waikato Museum, and featured at the trust's second symposium, City Gallery Wellington, October 15.