In a society where public speech was integral to the decision-making process, and where all affairs pertaining to the community were the subject of democratic debate, the communication between the speaker and his audience in the public forum, whether the law-court or the Assembly, cannot be separated from the notion of performance. Attic Oratory and Performance seeks to make modern Performance Studies productive for, and so make a significant contribution to, the understanding of Greek oratory.

Although quite a lot of ink has been spilt over the performance dimension of oratory, the focus of nearly all of the scholarship in this area has been relatively narrow, understanding performance as only encompassing 'delivery' - the use of gestures and vocal ploys - and the convergences and divergences between oratory and theatre. Serafim seeks to move beyond this relatively narrow focus to offer a holistic perspective on performance and oratory. Using examples from selected forensic speeches, in particular four interconnected speeches by Aeschines (2, 3) and Demosthenes (18, 19), he argues that oratorical performance encompassed subtle communication between the speaker and the audience beyond mere delivery, and that the surviving texts offer numerous glimpses of the performative dimension of these speeches, and their links to contemporary theatre.

Other Editions - Attic Oratory and Performance by Andreas Serafim 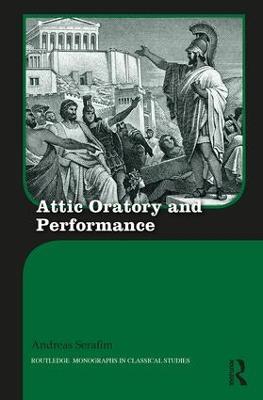 A Preview for this title is currently not available.
More Books By Andreas Serafim
View All