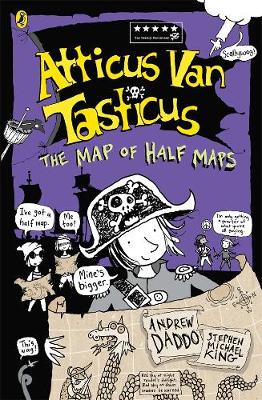 Atticus Van Tasticus 2: The Map of Half Maps

Description - Atticus Van Tasticus 2: The Map of Half Maps by Andrew Daddo

The second book in the Atticus Van Tasticus pirate series from the hilariously funny team of Andrew Daddo and Stephen Michael King.

ATTICUS VAN TASTICUS is back. And this time he means business. Having escaped certain disaster on the high seas, he's on the scent of treasure. Then the call comes from above- 'Ship ahoy, Captain, ship ahoy!'

If only it were good news, which of course it ain't. Vicious, mean and mighty unclean Bjorn Ironhead is on the warpath - and Atticus and his crew are in his sights. Stay and fight, or run and hide? But where do you hide a pirate ship, and who's this Captain Half Map, and, most of all, where's that TREASURE OF TREASURRRRES?!

Join Atticus and his crew as they roll from one adventure to certain disasterrrrr...