Australia's Jindyworobak Composers examines the music of a historically and artistically significant group of Australian composers active during the later post-colonial period (1930s-c. 1960). These composers sought to establish a uniquely Australian identity through the evocation of the country's landscape and environment, including notably the use of Aboriginal elements or imagery in their music, texts, dramatic scenarios or 'programmes'. Nevertheless, it must be observed that this word was originally adopted as a manifesto for an Australian literary movement, and was, for the most part, only retrospectively applied by commentators (rather than the composers themselves) to art music that was seen to share similar aesthetic aims.

Chapter One demonstrates to what extent a meaningful relationship may or may not be discernible between the artistic tenets of Jindyworobak writers and apparently likeminded composers. In doing so, it establishes the context for a full exploration of the music of Australian composers to whom 'Jindyworobak' has come to be popularly applied. The following chapters explore the music of composers writing within the Jindyworobak period itself and, finally, the later twentieth-century afterlife of Jindyworobakism. This will be of particular interest to scholars and researchers of Ethnomusicology, Australian Music and Music History. 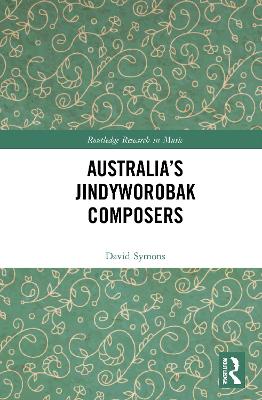 A Preview for this title is currently not available.
More Books By David Symons
View All