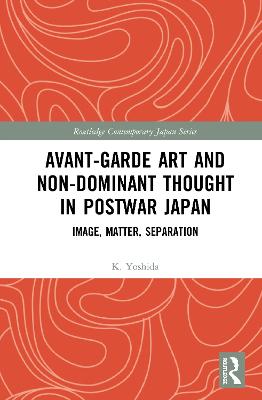 This book offers a reassessment of how "matter" - in the context of art history, criticism, and architecture - pursued a radical definition of "multiplicity", against the dominant and hierarchical tendencies underwriting post-fascist Japan.

Through theoretical analysis of works by artists and critics such as Okamoto Taro, Hanada Kiyoteru, Kawara On, Isozaki Arata, Kawaguchi Tatsuo, and Nakahira Takuma, this highly illustrated text identifies formal oppositions frequently evoked in the Japanese avant-garde, between cognition and image, self and other, human and thing, and one and many, in mediums ranging from painting and photography, to sculpture and architecture. In addition to an "aesthetics of separation" which refuses the integrationist implications of the human, the author proposes the "anthropofugal" - meaning fleeing the human - as an original concept through which to understand matter in the epistemic universe of the postwar Japanese avant-garde. Chapters in this publication offer critical insights into how artists and critics grounded their work in active disengagement, to advance an ethics of nondominance.

A Preview for this title is currently not available.
More Books By K. Yoshida
View All