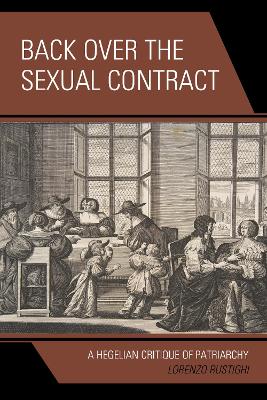 Back Over the Sexual Contract: A Hegelian Critique of Patriarchy

Description - Back Over the Sexual Contract: A Hegelian Critique of Patriarchy by Lorenzo Rustighi

Is patriarchy an illness of democratic societies or a structural problem? To answer this dilemma, Back Over the Sexual Contract: A Hegelian Critique of Patriarchy examines the problem of patriarchy in modern European political theory by reopening the question of the "sexual contract." Through a study of the thought of Thomas Hobbes, John Locke, Jean-Jacques Rousseau, and Immanuel Kant, Lorenzo Rustighi argues that the conceptual roots of male patriarchal entitlement should be sought in the logic of authorized power that underpins the modern understanding of both the state and the family. Challenging the mainstream distinction between the private and the public, Rustighi provocatively suggests that patriarchy is not something that undermines democracy as an alien threat, but is rather inscribed in the intrinsically anti-democratic effects of the understanding of democracy construed by the modern rationale of the social contract. He puts forward a Hegelian argument to propose an unconventional constitutional approach to feminist political theory that is intended to help us rethink democracy beyond its inherent impasses.

Buy Back Over the Sexual Contract: A Hegelian Critique of Patriarchy by Lorenzo Rustighi from Australia's Online Independent Bookstore, BooksDirect.