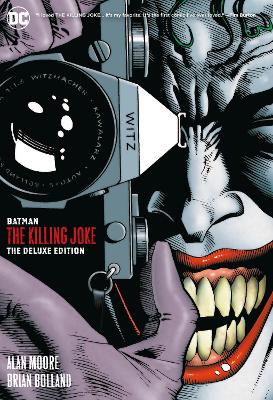 Critically acclaimed writer Alan Moore redefined the superhero with Watchmen and V for Vendetta. In Batman- The Killing Joke, he takes on the origin of comics' greatest super-villain, The Joker, and changes Batman's world forever.

Batman- The Killing Joke is Alan Moore's unforgettable meditation on the razor-thin line between sanity and insanity, heroism and villainy, comedy and tragedy.

One bad day is all it takes according to the grinning engine of madness and mayhem known as the Joker, that's all that separates the sane from the psychotic. Freed once again from the confines of Arkham Asylum, he's out to prove his deranged point. And he's going to use Gotham City's top cop, Commissioner Jim Gordon, and the Commissioner's brilliant and beautiful daughter Barbara to do it.

DC Black Label, a new publishing imprint from DC Entertainment, gives premier talent the opportunity to expand upon the canon of DC's iconic Super Hero comic book characters with unique, standalone stories that are outside of the current DC Universe continuity. An all star lineup of creative teams will craft their own personal definitive DC stories inthe tradition of compelling literary works like Batman- The Dark Knight Returns DC- The New Frontier and Kingdom Come.