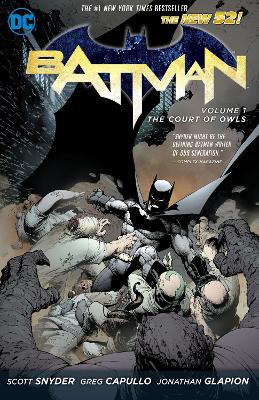 Description - Batman Volume 1: The Court of Owls TP (The New 52) by Scott Snyder

The reader will experience the story from Batman's viewpoint on pages 108-117.

After a series of brutal murders rocks Gotham City, Batman begins to realize that perhaps these crimes go far deeper than appearances suggest. As the Caped Crusader begins to unravel this deadly mystery, he discovers a conspiracy going back to his youth and beyond to the origins of the city he's sworn to protect.

Batman has heard tales of Gotham City's Court of Owls- that the members of this powerful cabal are the true rulers of Gotham. The Dark Knight dismissed the stories as rumors and old wives' tales. Gotham was his city. Until now.

A brutal assassin is sinking his razor-sharp talons into the city's best and brightest, as well as its most dangerous and deadly. If the dark legends are true, his masters are more powerful predators than the Batman could ever imagine.

This now-classic graphic novel from the #1 New York Times bestselling creative team of Scott Snyder and Greg Capullo is not just fantastic jumping-on point for any new reader, but one of the great Batman stories ever told. With every year that passes, this masterpiece becomes more entrenched into this medium's pantheon of the greatest stories ever told.