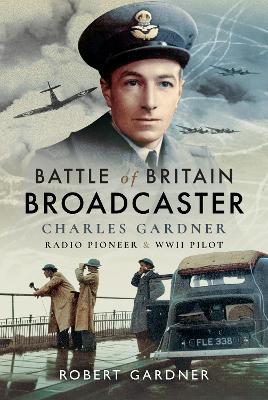 In 1936 Charles Gardner joined the BBC as a sub-editor in its news department. Shortly afterwards, he was joined by Richard Dimbleby and together they became the very first BBC news correspondents. They covered everything from shipwrecks to fires, floods to air raid precautions and, in Garner's case, new aircraft. Their exploits became legendary and they laid down the first principles of news broadcasting - of integrity and impartiality - still followed today. With the outbreak of war Charles Gardner became one of the first BBC war correspondents and was posted to France to cover the RAF's AASF (Advanced Air Strike Force). He made numerous broadcasts interviewing many fighter pilots after engagements with the Germans and recalling stories of raids, bomb attacks and eventually the Blitzkrieg when they all were evacuated from France. When he got home he wrote a book AASF which was one of the first books on the Second World War to be published. In late 1940 he was commissioned in the RAF as a pilot and flew Catalina flying boats of Coastal Command. After support missions over the Atlantic protecting supply convoys from America, his squadron was deployed to Ceylon which was under threat from the Japanese navy. Gardner was at the controls when he was the first to sight the Japanese fleet and report back its position. Gardner was later recruited by Lord Mountbatten, to help report the exploits of the British 14th Army in Burma. He both broadcast and filed countless reports of their astonishing bravery in beating the Japanese in jungle conditions and monsoon weather. After the war, Gardner became the BBC air correspondent from 1946-1953. As such, he became known as The Voice of the Air,' witnessing and recording the greatest days in British aviation history. AUTHOR: Robert Gardner, Charles Gardner's son, worked as a journalist for four years before moving into public relations with the British Aircraft Corporation becoming Head of Publicity and later Vice President of British Aerospace and BAE Systems. 16 b/w illustrations

A Preview for this title is currently not available.
More Books By Robert Gardner
View All