Been So Long: My Life and Music

Description - Been So Long: My Life and Music by Jorma Kaukonen

In a career that has spanned a half-century, guitarist Jorma Kaukonen has been at the forefront of American music and culture. A pioneer of the 1960s San Francisco scene, Jorma is best known for co-founding psychedelic rock band The Jefferson Airplane. With his subsequent band Hot Tuna, formed with Jefferson Airplane bassist Jack Casady, Jorma solidified a fan base that has endured to this day.

In this memoir, Jorma tells stories from his early life up to his present-day with reflections woven in. Jorma's story takes us around the globe, from meeting Jack in DC in the 50s to college to California to meeting Janis Joplin, Pigpen, Jerry Garcia, Bob Dylan, Phil Lesh and more. He tells all of the events of Jefferson Airplane's history and the story of his addiction and amazing recovery.

Jorma continues to tour today while also running and teaching at Fur Peace Ranch Guitar Camp, which is considered one of the world's most unique centers for the study of guitar and other instruments.

Perfect for fans of Robbie Robertson's Testimony and Deal by Bill Kreutzmann, Been So Long is the memoir for anyone who wants to hear stories about Jefferson Airplane, Hot Tuna, jam bands, and anyone interested in a national treasure who helped define 60s-70s rock.

Buy Been So Long: My Life and Music by Jorma Kaukonen from Australia's Online Independent Bookstore, BooksDirect.

Other Editions - Been So Long: My Life and Music by Jorma Kaukonen 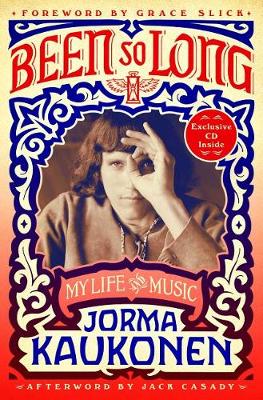 A Preview for this title is currently not available.
More Books By Jorma Kaukonen
View All