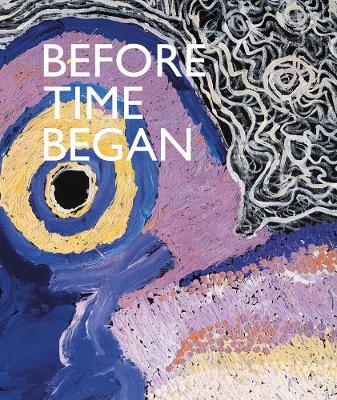 The common thread running right through this work is man's link with the land, the legacy of the ancestors that still echoes in the present. It is no accident that Before Time Began is one of the expressions used by indigenous Australian artists in central Australia to refer to the creation of the world, in an oneiric sense. Understanding and following this underlying bond enables the reader to explore the art's narrative content in its association with dreams and the passage of time, elements that inevitably distinguish the temporal dimension in the different societies. But it is also a way of exploring the first stirrings of contemporary art in an indigenous Australian context through works made at the beginning of the 1970s in Arnhem Land and in the territory of the Papunya, as well as more recent paintings by artists living in the APY (Anangu Pitjantjatjara Yankunytjatjara). These last examples in particular highlight the fusion between contemporary art and traditional customs, in which ancestral knowledge is fused with elements drawn from the inevitable march of progress. AUTHORS: Jessica De Largy Healy is an anthropologist at the Laboratoire d'ethnologie et de sociologie comparative (CNRS - Universite Paris Nanterre). Her Ph.D. research involved setting up an experimental digital archive project begun by a group of Yolngu clan chiefs living in Galiwin ku, in northeastern Arnhem Land. She is a collaborator on various projects organised by European museums concerning the material culture and audiovisual collections of indigenous Australians. Georges Petitjean is an art historian and obtained his Ph.D. with research on the art of the Western Australian Desert. His main field of research is the transformation of primordial Aboriginal art into contemporary art. He was curator of the Museum of Contemporary Aboriginal Art (AAMU) in Utrecht from 2005 to 2017. Since then, Georges Petitjean has been curator at Collection Berengere Primat, one of the leading collections of Aboriginal art in the world. Luke Scholes is curator of Aboriginal Art at the Museum and Art Gallery of the Northern Territory (MAGNT). He was co-organiser of the Tjungunutja: From Having Come Together exhibition, where various Pintupi, Walpiri, and Luritja artists, who are all linked to the school in Papunja, exhibited their works. Besides having already been awarded several Australian prizes, this project will be on display at Alice Springs in 2019. Luke Scholes has been the coordinator of Telstra National Aboriginal and Torres Strait Islander Awards since 2016. SELLING POINT: Overview of the Aboriginal Art, focusing on the first large-scale exhibition staged by the Fondation Opale (Switzerland) 57 colour images