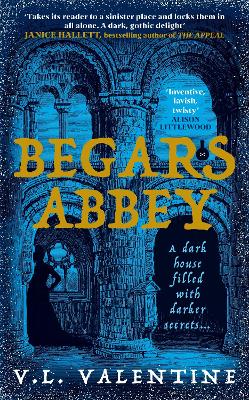 Winter 1954, and in a dilapidated apartment in Brooklyn, Sam Cooper realises that she has nothing left. Her mother is dead, she has no prospects, and she cannot afford the rent. But as she goes through her mother's things, Sam finds a stack of hidden letters that reveal a family and an inheritance that she never knew she had, three thousand miles away.

Begars Abbey is a crumbling pile, inhabited only by Sam's crippled grandmother, Lady Cooper, a housekeeper and a handful of servants. Sam cannot understand why her mother kept its very existence a secret, but her diaries offer a glimpse of a young girl growing increasingly terrified. As is Sam herself.

Built on the foundations of an old convent, Begars moves and sings with the biting wind. Her grandmother cannot speak, and a shadowy woman moves along the corridors at night. For there are dark places in the hidden tunnels beneath Begars. And they will not give up their secrets easily...

Perfect for readers of Laura Purcell and Natasha Pulley, Begars Abbey will keep you up at night. A Preview for this title is currently not available.
More Books By V.L. Valentine
View All