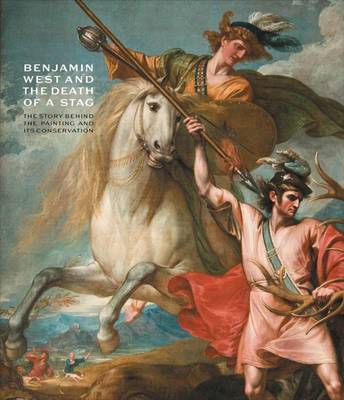 Benjamin West and the Death of the Stag

The Story Behind the Painting and Its Conservation

Benjamin West's The Death of a Stag, a tour de force of pictorial theatre and his own unique Scottish masterpiece, has been the focus of high drama for over two centuries. Painted for the Clan Mackenzie in 1786, the gigantic canvas, measuring twelve by seventeen feet, is still the largest in the collection of the National Galleries of Scotland. The painting almost left these shores for America, but after a successful campaign, it was purchased in 1987. In 2004, the work was conserved in situ in the National Gallery of Scotland and this book tells the story of the picture, both in terms of its history and the conservation process. AUTHOR: Duncan Thomson was Keeper of the Scottish National Portrait Gallery from 1982 to 1997. He is currently writing a history of the Gallery, for publication in 2011. He has been Chairman of the conservation body, The Mansfield Traquair Trust, since 1996. Since 2003 he has been an Honorary Fellow of the School of Arts, Culture and Environment in the University of Edinburgh. SELLING POINTS: - A concise history of the largest painting in the collection of the National Galleries of Scotland - Illustrates many details of the picture at the various stages of conservation - Contains an essay on the full conservation process ILLUSTRATIONS 33 colour illustrations

Buy Benjamin West and the Death of the Stag by Duncan Thomson from Australia's Online Independent Bookstore, BooksDirect.

A Preview for this title is currently not available.
More Books By Duncan Thomson
View All