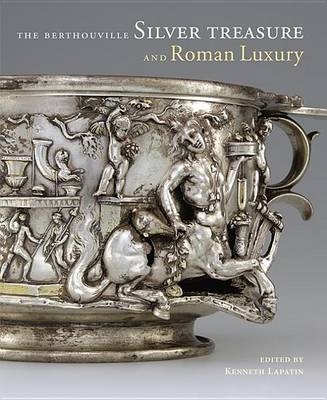 Description - The Berthouville Silver Treasure and Roman Luxury by . Lapatin

In 1830 a farmer plowing a field near the village of Berthouville in Normandy, France, discovered a trove of ancient Roman silver objects weighing some 55 pounds (25 kilograms). The Berthouville treasure, as the find came to be known, includes two statuettes representing the Gallo-Roman god Mercury and approximately sixty vessels-bowls, cups, pitchers, and plates, many of which bear votive inscriptions-along with dozens of smaller components and fragments. Dedicated to Mercury by various individuals, the treasure, including some of the finest ancient Roman silver to survive, fortunately escaped being melted down. It was acquired by the Cabinet des medailles et antiques of the Bibliotheque Royale (now the Departement des Monnaies, medailles et antiques of the Bibliotheque nationale de France), where it was displayed until late 2010, when it was brought in its entirety to the Getty Villa together with four large, late antique silver plates, each with its own colorful history, for comprehensive conservation treatment.
?
This sumptuously illustrated volume is published to accompany an exhibition of the same name, opening at the Getty Villa on November 18, 2014. It presents the highlights of the treasure and other Roman luxury arts from the holdings of the Cabinet des medailles-including precious gems, jewelry, gold coins, and colored marbles-and contextualizes them in a series of elucidating essays.

A Preview for this title is currently not available.
More Books By . Lapatin
View All