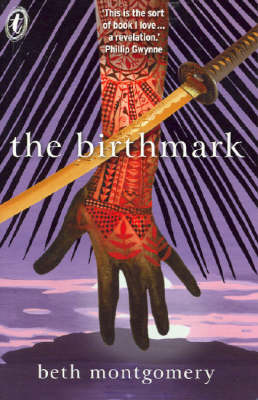 Description - The Birthmark by Beth Montgomery

In The Birthmark, Text Publishing's first YA fiction release, debut novelist Beth Montgomery takes us to the fictional island of Tevua, north-east of Australia. The Birthmark interweaves the stories of two generations of Islanders- in 1942 young lovers Tepu and Edouwe struggle to survive under the brutal Japanese occupation; and in 2004 teenage friends Hector and Lily fight an altogether different battle with boredom, poverty and parental neglect. Both outsiders for different reasons, Lily and Hector spend their summer holiday roaming through the island's thick forests and around the coral pinnacles on the beach. They discover a Japanese sword, a relic of World War Two, and soon afterwards an angry Japanese soldier begins to haunt Lily's dreams. What does the ghostly soldier have to tell Lily? When she hears a woman screaming in her dreams, why does Lily's birthmark burn? Will the sword be used again? And can the younger generation somehow resolve the crimes of the past?

A Preview for this title is currently not available.
More Books By Beth Montgomery
View All