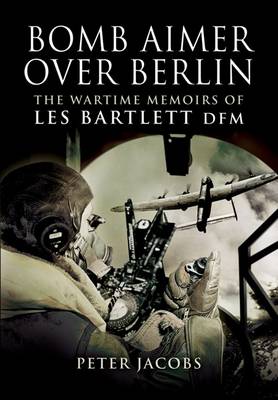 Les Bartlett has become one of the great characters of WWII history. He flew as bomb aimer with the then Flying Officer Michael Beetham, who later became Marshal of the Royal Air Force. At the time he was a sergeant but gained his commission in April 1944 and flew his tour, including 27 raids over Germany and France between November 1943 and May 1944. On his second operation his aircraft was attacked by a Ju 88, leaving it with no flaps or brakes - a crash landing at Wittering ensued. At the end of his third mission they found the whole of Lincolnshire fogbound and eventually landed at RAF Melbourne in Yorkshire just before that airfield was closed also because of the fog. His aircraft was hit in the wing by a 30lb incendiary bomb dropped by another Lancaster flying above them on his sixth operation - but they survived. On his twelfth operation to Leipzig he used the nose guns to destroy a Ju 88 night fighter, for which he was awarded the DFM. In February 1944 the port outer engine caught fire and the crew baled out. Les was then posted as Assisstant Adjutant to RAF Thornaby. AUTHOR:Les Bartlett has been quoted in many Bomber Command books including Pen & Sword's Bomber Command by Ken Delve. Les is well known character in the world of aviation history. Peter Jacobs is a serving RAF Group Captain and has previously written Battle of Britain - 11 Group for Pen & Sowrd. > Les is well known charater in the world of aviation history. >> Includes many dangerous and thrilling moments. 80 b/w photos