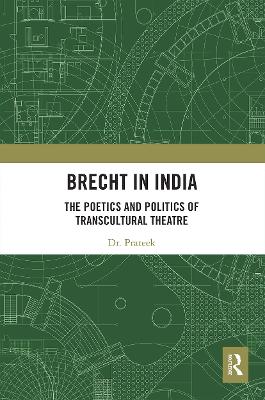 Brecht in India: The Poetics and Politics of Transcultural Theatre

Description - Brecht in India: The Poetics and Politics of Transcultural Theatre by Prateek

Brecht in India analyses the dramaturgy and theatrical practices of the German playwright Bertolt Brecht in post-independence India.

The book explores how post-independence Indian drama is an instance of a cultural palimpsest, a site celebrating a dialogue between Western and Indian theatrical traditions, rather than a homogenous and isolated canon. Analysing the dissemination of a selection of Brecht's plays in the Hindi belt between the 1960s and the 1990s, this study demonstrates that Brecht's work provided aesthetic and ideological paradigms to modern Hindi playwrights, helping them develop and stage a national identity. The book also traces how the reception of Brecht was mediated in India, how it helped post-independence Indian playwrights formulate a political theatre, and how the dissemination of Brechtian aesthetics in India addressed the anxiety related to the stasis in Brechtian theatre in Europe.

Tracking the dialogue between Brechtian aesthetics in India and Europe and a history of deliberate cultural resistance, Brecht in India is an invaluable resource for academics and students of theatre studies and theatre historiography, as well as scholars of post-colonial history and literature.

Buy Brecht in India: The Poetics and Politics of Transcultural Theatre by Prateek from Australia's Online Independent Bookstore, BooksDirect.

Other Editions - Brecht in India: The Poetics and Politics of Transcultural Theatre by Prateek A Preview for this title is currently not available.
More Books By Prateek
View All