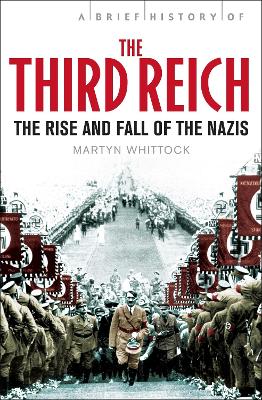 A Brief History of The Third Reich

The Rise and Fall of the Nazis

Description - A Brief History of The Third Reich by Martyn Whittock

The abuse of power, genocide, the destruction of total war, unimaginable cruelty and the suffering of millions were all central features of Hitler's Nazi regime. Yet the Nazis were also highly successful in manipulating images and information: they mobilized and engaged vast numbers of people, caught the imagination of the young and appeared remarkably modern to many contemporary observers. Was the Third Reich a throwback to a mythical past or a brutally modern and technologically advanced state? Was Hitler a strong dictator who achieved his clear goals, or was his chaotic style of government symptomatic of a weak dictator, unable to control the complex and contradictory forces that he had unleashed? Was the Third Reich ruled by terror, or largely supported by a compliant German population? Was the genocide against the Jews a peculiarly German phenomenon, or a uniquely German expression of a terrible wider trend? Whittock explores these and other key questions, interrogating the views of different historians and drawing on a wealth of primary sources - from state-sponsored art to diaries, letters and memoirs of both perpetrators and victims - to provide an overview of the complex evidence. History should aim to put us firmly in touch with the lives of people living in the past and the issues they faced. Whittock never loses sight of the individuals whose lives were caught up in these extraordinary events, while also giving a lucid overview of the bigger picture.