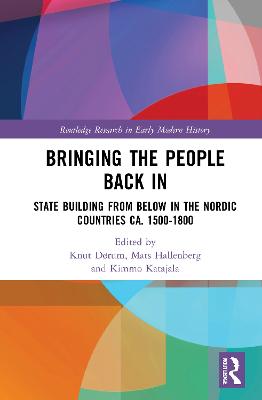 Bringing the People Back In: State Building from Below in the Nordic Countries ca. 1500-1800

Description - Bringing the People Back In: State Building from Below in the Nordic Countries ca. 1500-1800 by Knut Dorum

The formation of states in early modern Europe has long been an important topic for historical analysis. Traditionally, the political and military struggles of kings and rulers were the favoured object of study for academic historians. This book highlights new historical research from Europe's northern frontier, bringing 'the people' back into the discussion of state politics, presenting alternative views of political and social relations in the Nordic countries before industrialisation. The early modern period was a time that witnessed initiatives from people from many groups formally excluded from political influence, operating outside the structures of central government, and this book returns to the subject of contentious politics and state building from below.

Buy Bringing the People Back In: State Building from Below in the Nordic Countries ca. 1500-1800 by Knut Dorum from Australia's Online Independent Bookstore, BooksDirect.

A Preview for this title is currently not available.
More Books By Knut Dorum
View All