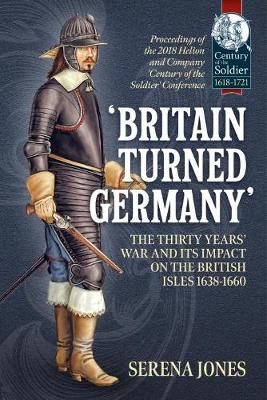 'Britain Turned Germany': the Thirty Years' War and its Impact on the British Isles 1638-1660: Proceedings of the 2018 Helion and Company 'Century of the Soldier' Conference

Description - 'Britain Turned Germany': the Thirty Years' War and its Impact on the British Isles 1638-1660: Proceedings of the 2018 Helion and Company 'Century of the Soldier' Conference by Serena Jones

The speakers at the 2018 Helion conference offer a variety of insights into the depth and direction of research into the Thirty Years' War, with particular reference to the war's effect on the British Isles, the careers of the officers from its shores who participated in the conflict, and the 'trickle-down' effect of the war into the military thinking and technology of those isles. Keynote speaker Professor Steve Murdoch examines the changes in understanding of British military participation in the Thirty Years' War from a once unsophisticated and dismissive approach to a more enriched and interesting field of study. Keith Dowen examines the work of Catholic Irish colonel Gerat Barry, which has been largely overlooked. Michal Paradowski looks into the careers of three officers from the British Isles who fought abroad Arthur Aston Jr, James Butler and Scotsman James Murray. Arran Johnston considers the importance of General Alexander Leslie and his officer corps, and the importance of their overseas service in the Thirty Years' War as the basis for the effectiveness of the Scottish army in the Bishops' Wars. Prof. Martyn Bennett explores the process of appointment of the rival command structures in 1642, at the start of the English Civil Wars. David Flintham considers the foreign, especially Dutch, influence on English fortification during the period, the methods employed and those who practised them. Stephen Ede-Borrett examines contemporary vexillology, and how much the Thirty Years' War influenced the military flags used by the English Armies from 1639 to 1651. AUTHOR: S.F. Jones spent many years as an English Civil War re-enactor before earning a BA Honours in History as a mature student and starting her own publishing company to make primary 17th century texts available for modern researchers. She is currently transcribing and annotating the civil war newsbooks, and researching the lesser-known officers of Charles I's 'Oxford Army'. No Armour But Courage is the first of her works to be published outside her own company. 20 b/e illustrations, maps

Buy 'Britain Turned Germany': the Thirty Years' War and its Impact on the British Isles 1638-1660: Proceedings of the 2018 Helion and Company 'Century of the Soldier' Conference by Serena Jones from Australia's Online Independent Bookstore, BooksDirect.

A Preview for this title is currently not available.
More Books By Serena Jones
View All