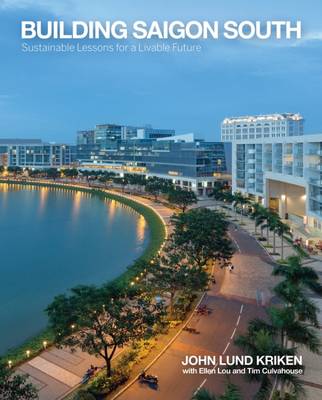 Sustainable Lessons for a Livable Future

In the Saigon South district of Vietnam's Ho Chi Minh City, globally renowned architecture firm Skidmore Owings & Merrill designed a livable, human-scale urban environment in partnership with the Phu My Hung development group. SOM created the master plan that still guides growth and change in this part of the city, which has been accepted as an example of sustainable development to be imitated across Asia and throughout the rest of the world. Saigon South's neighbourhoods accommodate residents of varying income levels and provide green public space for all. Verdant parks are placed alongside the area s natural water features. The master plan's emphasis on multi-use design allows for traditional shophouses as well as larger businesses, integrating all parts of life into a pedestrian-friendly district. Saigon South is an economically and civically vibrant district that showcases the city's cultural richness rather than the egos of the architects and developers. AUTHORS: John Lund Kriken FAIA is an architect and consulting partner at the San Francisco office of Skidmore Owings & Merrill and a professor at UC Berkeley's College of Environmental Design. Kriken's two previous books, both published in multiple languages, are City Building: Nine Planning Principles for the Twenty-First Century (Princeton Architectural Press, 2010) and Building Saigon South (ORO Editions, 2016). He has served on the board of the San Francisco Art Commission during the tenure of three mayors, holding similar positions with the San Francisco Planning Commission, Intersection for the Arts, the Fort Mason Center, San Francisco Planning and Urban Research (SPUR), the Bay Conservation and Development Commission (for thirty-five years), and the San Francisco chapter of the Greenbelt Alliance. Ellen Lou is a licensed architect and certified city planner. She leads the Urban Design + Planning group for SOM's San Francisco office and has directed many world-renowned urban design and planning efforts in the United States. She has lectured and served as visiting instructor at MIT, Stanford University, North Dakota University, CA Academy of Arts and UC Berkeley. She is a board member for San Francisco Urban Planning and Research, as well as San Jose Downtown Architecture Review Committee. 200 colour photographs

A Preview for this title is currently not available.
More Books By Tim Culvahouse
View All