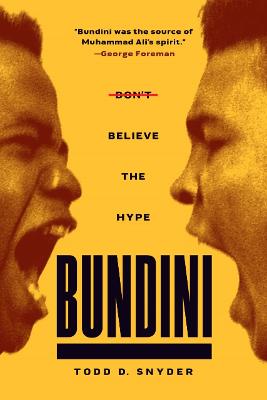 Fifty years after he coined the iconic phrase Float like a butterfly, sting like a bee, Drew 'Bundini' Brown remains one of boxing's most mysterious and misunderstood figures. His impact on the sport and the culture at large is undeniable. Cornerman and confidant to two of the greatest fighters ever - Sugar Ray Robinson and Muhammad Ali - Brown lived an extraordinary American life.

After a poverty-stricken childhood in Jim Crow Florida, Brown came of age traveling the world as a naval steward. On being discharged, he settled in New York City and spent wild nights in the jazz joints of Harlem, making a name for himself as the charismatic street philosopher and poet some called 'Fast Black.' He married a white woman from a family of Orthodox Jewish immigrants, in dramatic defiance of 1950s cultural norms, and later appeared in films such as the blaxploitation classic, Shaft.

'I think Bundini was the source of Muhammad Ali's spirit. I wouldn't even call him a trainer or cornerman, he was more important than a trainer. Ali had an unmeasurable determination and he got it from Bundini.' - George Foreman

'A total joy. This is one my favourite boxing books of all time.' - Jonathan Eig, best-selling author of Ali: A Life

'Vivifies the cultural icon who was instrumental to Ali's success...Bundini employs quotes and anecdotes in a skillful way alongside solid contextual information...Authoritative and entertaining, Bundini comes through for boxing fans and for those interested in Black American culture.' - Foreword Reviews

'Mr. Snyder writes lyrically, and his research appears to be impeccable: It's hard to imagine that anyone has slipped through his interview net.' - The Wall Street Journal

A Preview for this title is currently not available.
More Books By Todd D. Snyder
View All