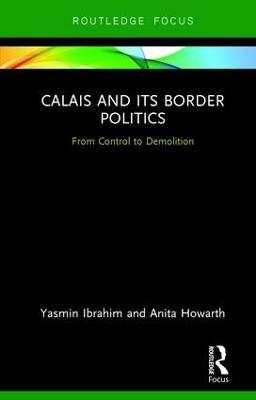 Calais and its Border Politics

From Control to Demolition

Description - Calais and its Border Politics by Yasmin Ibrahim

Calais has a long history of transient refugee settlements and is often narrated through the endeavour to 'sanitize' it by both the English and the French in their policy and media discourses. Calais and its Border Politics encapsulates the border politics of Calais as an entry port through the refugee settlements known as the 'Jungle'. By deconstructing how the jungle is a constant threat to the civilisation and sanity of Calais, the book traces the story of the jungle, both its revival and destruction as a recurrent narrative through the context of border politics. The book approaches Calais historically and through the key concept of the camp or the 'jungle' - a metaphor that becomes crucial to the inhuman approach to the settlement and in the justifications to destroy it continuously. The demolition and rebuilding of Calais also emphasises the denigration of humanity in the border sites.

The authors offer a comprehensive insight into the making and unmaking of one of Europe's long-standing refugee camps. The book explores the history of refugee camps in Calais and provides an insight into its representation and governance over time. The book provides an interdisciplinary perspective, employing concepts of space making, human form and corporeality, as well as modes of representation of the 'Other' to narrate the story of Calais as a border space through time, up to its recent representations in the media.

This book's exploration of the representation and governance of the contentious Calais camps will be an invaluable resource to students and scholars of forced migration, border politics, displacement, refugee crisis, camps and human trauma.

A Preview for this title is currently not available.
More Books By Yasmin Ibrahim
View All