Came Back To Show You I Could Fly

The iconic, much-loved winner of the 1990 CBCA Book of the Year Award for Older Readers, now republished as a Text Classic with an introduction by Simmone Howell.

Seymour is bored and lonely, and running from a gang of kids when he opens a back-lane gate. And there is Angie. She is older than Seymour, confident, cool and alluring, and she treats him with the affection of an older sister. Seymour is captivated - through Angie he is awakened to the fun and adventure in life. But Angie has a dark side - a secret that threatens to destroy her. And as Seymour begins to understand that all is not well he knows he has to help her.

Came Back to Show You I Could Fly is a heartwarming account of an unlikely friendship that shows a very human side of drug addiction.

Came Back to Show You I Could Fly won a Human Rights Award for Literature in 1989. It also won the 1990 Australian Children's Book of the Year Award, Older Readers, and was shortlisted for the 1990 Victorian Premier's Literary Award and the 1990 NSW Premier's Literary Award, as well as named a White Raven book at the 1990 Bologna Children's Book Fair. Say A Little Prayer, the film version, was released in 1993.

Buy Came Back To Show You I Could Fly by Robin Klein from Australia's Online Independent Bookstore, BooksDirect. 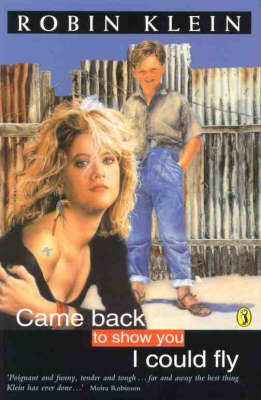