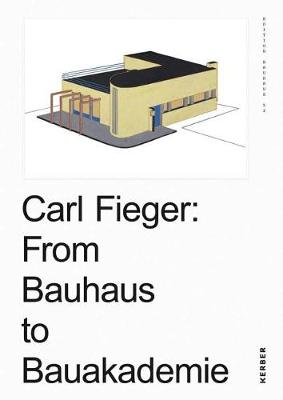 Carl Fieger: From the Bauhaus to the Building Academy

Description - Carl Fieger: From the Bauhaus to the Building Academy by Carl Fieger

With his very first building of 1924, the single-family home titled the Wohnmaschine (machine for living in), Bauhaus architect and designer Carl Fieger (1893-1960) made architectural history, greatly influencing his modernist colleagues. Later, in the '50s, he was responsible for Germany's first prefab housing. Today Fieger is probably best known as a draftsman, initially for Peter Behrens' office and later for the office of Walter Gropius and Adolf Meyer, where he was involved in planning numerous iconic buildings, among them the Fagus Factory in Alfeld (1922-25), and the Bauhaus Building and Masters' Houses in Dessau. Between 1925 and 1928 he taught at the Bauhaus Dessau. Reproducing designs, drawings and photographs, this book presents the innovative projects he realised as an independent architect and furniture designer, and examines his close connection to the Bauhaus. 102 colour, 39 b/w images

Buy Carl Fieger: From the Bauhaus to the Building Academy by Carl Fieger from Australia's Online Independent Bookstore, BooksDirect.