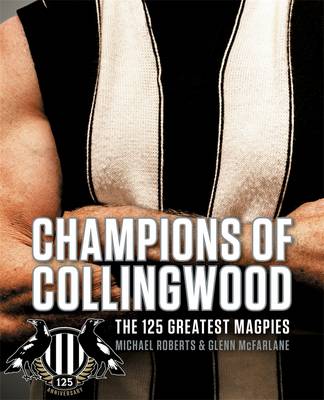 Champions of Collingwood: The 125 Greatest Magpies

Description - Champions of Collingwood: The 125 Greatest Magpies by Glenn McFarlane

These are the men whose blood, sweat and heroics have made Collingwood the greatest sporting club in Australia.Since 1892, more than 1200 men have played senior football for Collingwood. This book, produced to celebrate the club?s 125th anniversary, tells the stories of the 125 greatest players to have pulled on the famous black-and- white jumper. It recalls the deeds, careers, lives and legends of some of the Magpies? most revered players, from the earliest days of the 1890s right through to the current day. The stories take us not only through the 125 champions? football careers but also into their backgrounds and personalities, meaning readers really get to know the players - even those from the distant past. There are also stats and rarely seen photos, all presented in a beautiful large-format book.

A Preview for this title is currently not available.
More Books By Glenn McFarlane
View All