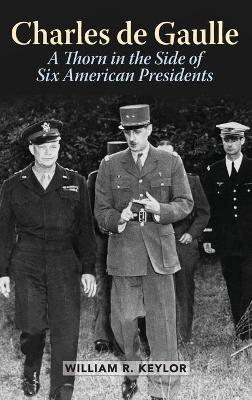 Charles de Gaulle: A Thorn in the Side of Six American Presidents

Description - Charles de Gaulle: A Thorn in the Side of Six American Presidents by William R. Keylor

In this definitive history, William R. Keylor traces the tumultuous relationship between Charles de Gaulle and a host of other key twentieth-century figures: his former mentor Marshal Philippe Petain, who headed the collaborationist government in the southern French city of Vichy as the German army occupied the northern two-thirds of the country; Sir Winston Churchill, the British prime minister whose government supported and financed de Gaulle and the Free French, but who clashed with the French leader on a number of hot-button issues; and, most critically, the six American presidents from FDR to Nixon. Keylor uses the metaphor "thorn in the side" to emphasize the fact that challenges from the intrepid French leader were often an annoyance to the Americans, who all had many more important issues to deal with--World War II for Roosevelt and Truman, the Cold War for Eisenhower, and the Vietnam War for Kennedy and Johnson. Richard Nixon alone had an excellent relationship, but the two men overlapped for only four months before de Gaulle's retirement. Thoroughly researched and deeply knowledgeable, this gripping book will appeal to all readers interested in contemporary French and US history.

Buy Charles de Gaulle: A Thorn in the Side of Six American Presidents by William R. Keylor from Australia's Online Independent Bookstore, BooksDirect.

A Preview for this title is currently not available.
More Books By William R. Keylor
View All